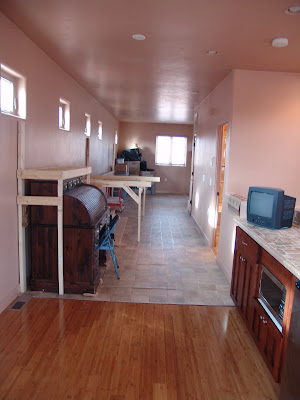 The chairwoman of the board and the president of the railroad acquired property in St. George, Utah. Being amateur architects they worked together to design a new home. As the plan neared completion the president pointed out that no real estate had been identified for the reconstituted AT&SG. “Perhaps it could occupy one bay of the garage,” the chairwoman suggested. A couple of historical and climatic facts may be helpful to the reader to understand this negotiation. The Logan, Utah AT&SG occupied two basement rooms each 15 by 24 feet. The railroad shared one of the rooms which served occasionally as a recreation room but otherwise the railroad occupied most of the space. A third adjoining room served as a shop for the railroad. Fact number two: while winters are usually mild, the temperature in St. George in the summer often exceeds 100° Fahrenheit. Air conditioning solves the problem when the space is occupied but have you ever seen what happens to track when there is wide range of temperature (think expand and contract)? The president vetoed the garage real estate as not acceptable, besides the garage was needed for the shop. So the architects went back to the drawing board. A basement was ruled out because of soil conditions. The answer was found by going up, a second story was added over one wing of the house providing a very nice bonus (i.e. railroad) room (see photo). The reconstituted AT&SG will be more compact but with good design will still be able to serve its industries efficiently providing for interesting railroad action. The tax assessment woman who visited the house after its completion was very confused by the blue print which indicated that this was the railroad room. She had never evaluated a railroad room before.

There was, however, one more stage to the negotiations. Once the house was far enough along to allow a walk through inspection it became obvious that the view from the front of the “railroad room” was spectacular. “Wow,” exclaimed the chairwoman, “what a view!” The front section of the railroad room was reclaimed as a sitting area, i.e. board room, and alternative bedroom for visiting grandchildren. The available real estate was once more reduced to the rear section of the railroad room. It is still a respectable size and more likely to be completed within the lifetime of the president. The photo shows the "board room." 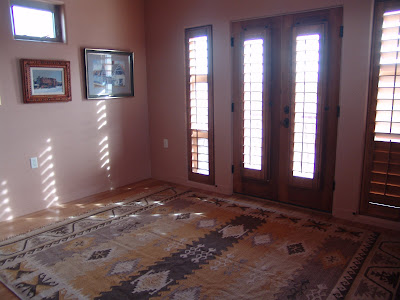 Posted by Ascape Tennsion & Sulphur Gulch Railroad at 11:53 AM