The Roadbed is the support under the track. The management chose to use spline for the roadbed for several reasons. First, it is 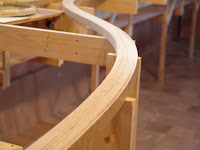 much easier to bend the spine around curves than it is to cut plywood to the proper curvature. Second, spine tends to form a natural curve that provides natural transition curves. 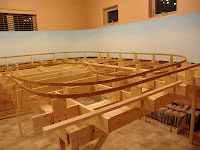 curve rather than a sudden change from straight to a curve of a given radius. This makes for much more pleasing curves that replicate curves on the prototype (real railroad) much more closely. However, the curves on a model railroad have a much smaller radius than the equivalent curve on the prototype because of the limited space. 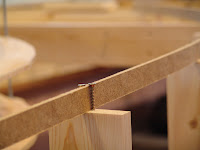 So what is a spline? First we cut 1/4 inch Masonite into 1 inch strips. The first strip is placed on the joists or on risers to follow the plan for the track of the main line. This strip is held in place by screws placed temporarily on either side on each joist or riser.

After the first strip is in place the main line of the railroad is defined. The next step is to glue additional strips of Masonite to 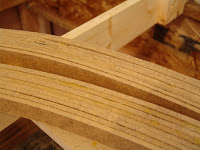 this guide strip. We mostly use hot glue to glue these splines together. The spline for this HO railroad required 8 splines to be glued together to form the roadbed that is 2 inches wide.

This process goes pretty fast but it does take a lot of strips and even more hot glue. If you have worked with hot glue you know that you have to work fast. We found that it is easier with a track crew (2 people), one to apply the glue and the other to immediately position and hold the spline in place. It is important to keep the top edges of the splines as level as possible during this gluing process. 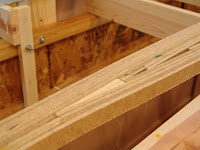 The track crew found that when there is a turnout that the roadbed must accommodate this by allowing a spline to branch from the main spline. The crew found that gluing a small triangle to the first spline at the place of the turnout facilitated keeping the angle of the branching roadbed correct. The triangles were cut to accommodate the angle of the turnout. Most of the turnouts from the mainline on the Ascape Tennsion and Sulphur Gulch are #6 turnouts meaning that the branch line diverges 1 unit for every 6 unites of length. Again much more abrupt than the prototype but more practical for a model. 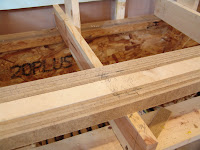 With the spline roadbed in place it will be time to move to large flat areas where spline roadbed is not practical. This includes the staging area, the yard at Ascape, Park City, and Coalville. We are still working on the spline but come back soon for a description of the next phase.
Posted by Ascape Tennsion & Sulphur Gulch Railroad at 12:54 PM No comments: Links to this post

14 THE TRESTLE AT SULPHUR GULCH


14 The Trestle at Sulphur Gulch 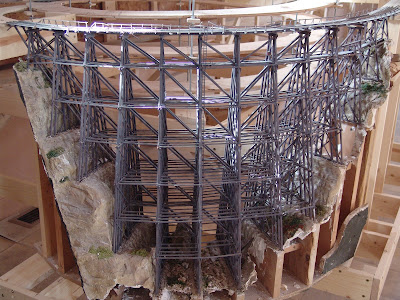 At last we get to see something that looks like a railroad rather than just lumber.

The lumber was sawed from a single 1x4 piece of clear pine wood. Using a radial arm saw the 1x4 was first sliced into 1/4 inch strips. Using a miniture table saw these strips were then sawed into scale lumber of the various sizes needed for the trestle. Once the lumber was sawed the construction began.

The bents were constructed first by laying out the upright supports over the blueprint and held in place by double stick tape. The cross pieces were then glued in place for each bent. The glue was allowed to dry overnight and then the bent was turned over and the other side glued. This process was repeated for several weeks until all the bents had been constructed. A curve of plywood was then sawed to match the curve of the track where the trestle would be placed. This curve of plywood was then elevated to match the grade of the track. The track support on the top of the trestle were then placed on this curve under the location of the track and held in place with double stick tape. The bents were then glued to the track supports and held in a vertical position using a level. Then the cross pieces between the bents were glued in place. With the major construction completed the details were added such as ladders, a walkway, railings, etc.

This trestle has been stored for several years and has suffered some minor damage mostly to handrails and a few cross pieces but no structural damage.

Back to the present. It is necessary to have the trestle located before laying out the roadbed so that it is in the exact location necessary. The benchwork for the trestle is then build to accommodate its location. The operation has trains coming from staging into the helix and after a few turns exiting the helix onto the trestle. When the scenery is in place there will be a tunnel entrance just beyond the end of the trestle. The other end of the trestle leads to a track that has been blasted out of the side of a very steep cliff. This mountain and cliff will hide the helix when the scenery is in place. 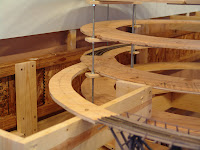 So our challenge was to position the trestle to make sure it is lined up perfectly with the helix and then to build benchwork toaccommodate the roadbed leading to the other end of the trestle. Thisadditional benchwork was build around the benchwork that holds the helix as shown in the photos. 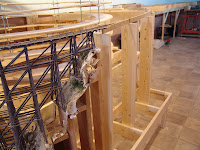 Once the benchwork was in place then the spline roadbed was lined up with the end of the trestle and supported on tall risers that will be hidden in the cliff that will go from above eye level (over 6 feet) to just above the floor. The track will then appear to have been blasted out of the cliff and then onto the trestle. You may not see this wonderful scenery in your mind's eye yet but check back in the near future and this scenery will appear.

If you have been following the progress on this reconstruction you may have noted that the location of Sulphur Gulch has moved from the peninsula in the middle of the room to in front of the helix. The chairperson of the board was very concerned that with narrow aisles for operators that a trestle on the back curve of the peninsula was sure to get damaged by giants in the land. Isn't it amazing that we can move a geological feature such as Sulphur Gulch to accommodate better viewing of this key feature of the AT&SG Railroad? Of course we will have to rewrite the history of the railroad to justify this move ... revisionsist history! The new location is much better, it provides a wonderful scene as visitors enter the railroad room and puts the key feature from which the railroad gets its name right up front. It is wise to listen to the chairperson of the board!
Posted by Ascape Tennsion & Sulphur Gulch Railroad at 12:52 PM No comments: Links to this post