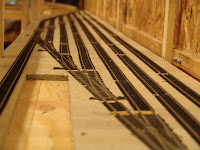 As soon as work resumed on the railroad the road gang went to work on laying track. As indicated in they previous diagrams the staging yard consists of a double ended yard with a ladder on either end. The longest track is more than 10 feet long, far longer than any train that will be able to make the 3% grade to climb the helix. The shortest track is about 3 feet long. The operation of the yard is to enter from the helix at the far end in the picture, proceed along the through track closest to the front of the yard (the left hand track in the picture) and then around the return loop at the end of the yard entering the ladder (shown in the picture) and being stored on one of the other six tracks in the yard ready for the next trip across the railroad. Since both ends of the railroad enter the helix this is true for both westbound and eastbound trains.
Details: If you have a causual interst in Model Railroads you may want to skip the following details which are primarily for those interested in construction techniques, materials used, etc. 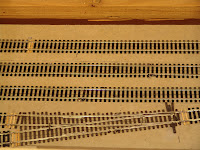 Track: As indicated in an earlier post the track bed is homosote. The track is code 100 Atlas Flex track. This track is easy to use and is secured by means of a nail in about every 10th tie. The turnouts are a variety of brands rescued from the previous ATSG Railroad. They were salvaged when the railroad was disassembled. As a result the major construction task was to clean up the ends of the rails, repair sections which had come loose from their ties, and replace missing track. All the turnouts are #6 to facilitate the largest locomotive on the railroad (a Bachman Mountain 2-8-4). An earlier railroad demonstrated the desirability of having a rerail section near the end of each yard track so that in the event of an accidental derailment cars are put back on the rail before leaving the yard end and entering the helix. 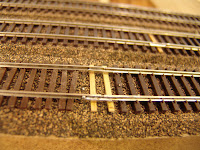 To ensure good electrical contact each of the joints between sections of rail are attached with a rail joiner and then soldered in place. 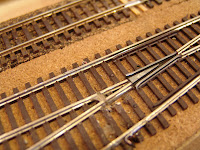 The control system on the railroad is Rail Lynx (more about this system in a later post). This is an infrared system similar to Command Control except that the control is a beam from the throttle transmitter rather than through the rails. The rails have a constant 12 volt current. This makes it necessary to gap the rails to prevent short circuits. These gaps occur just beyond the frog on each of the 13 turnouts in the yard. To make these gaps smooth the gap is filled with a small piece of styrene and then held in place with super glue. The filler is then filed to the shape of the rail. This prevents the rails from accidentally reestablishing contact if the rails expand (when the room gets too warm) or slip causing the gap to close. 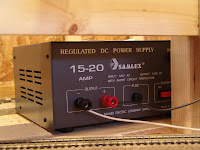 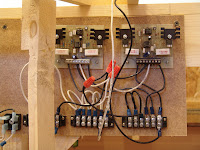 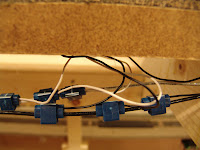 Wiring with this system is very simple. A pair of 14 gauge buss wires follow the track. 18 gauge leads are soldered to the track about every 3 to 5 feet and connected to the buss wires with tap connectors. Each turnout is also connected to the buss wire. Having wired an earlier railroad using block control I can assure you that this type of wiring is very simple in comparison. Obviously the track is always hot and the control comes from the receiver in each locomotive (more on Rail Lynx later). For those who are interested, the Rail Lynx control system was reviewed in the July 2009 issue of Model Railroader magazine.
The return loop at the end of the yard requires that the polarity of the track be reversed when a train is in the loop. Our plan is to control this reverse polarity automatically with a Circuitron Auto Polarity Reverser (AR-1CC). At this writing it has not yet arrived. A later post will report on its operation. 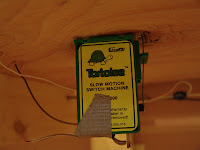 Turnouts in the staging yard are controlled by Tortoise switch machines. Many thanks to Doug Whetstone and Craig Harding for laying on their backs all afternoon installing these machines. A railroad of this size would not possible without the help of many hands. These machines are wired for route control, that is, setting a rotary switch to a track number lines up all the turnouts for this track. The system used was described in the May 2009 issue of Model Railroader magazine (talk about good timing for an article). The first set of turnouts have all been wired and they work as expected, each turnout slowly moving to the correct setting when the rotary switch is moved to the track number.
The control panel for staging is under construction and will consist of a rotary switch for the ladder at each end of the staging yard. It will also contain a closed circuit TV to show the far end of the yard to the operator to facilitate operation when the scenery is in place above the yard. It will also control a signal at either end of the railroad so that the staging operator can indicate to operators whether or not they are clear to enter the helix to enter staging. More about this control panel in a later post.
Posted by Ascape Tennsion & Sulphur Gulch Railroad at 3:11 PM No comments: Links to this post