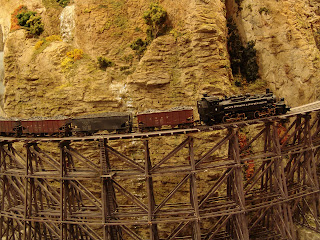 Uinta 2-6-6-2 is hauling a string of hoppers loaded with coal across the trestle at Sulphur Gulch. Upper Cadi Falls is visible in the upper left of the photo. Behind the trestle one can see Lower Cadi Falls. The locomotive is just passing Devil's Slide.

The major activity during the month of December was the construction of Whetstone Ridge, Lost Creek, Upper Cadi Falls, Lower Cadi Falls and Devil's Slide.

The remainder of this posting will describe the construction process of this key location. Because of its scenic beauty and the significant expense required the board of directors decided to include Sulphur Gulch in the name of the railroad. It has turned out that this location is a major tourist attraction for passengers. 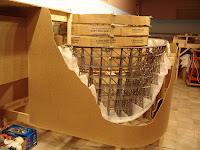 Whetstone Ridge and Sulphur Gulch were constructed for two purposes: first to hide the helix and second to provide the scenic attraction for which the railroad is named. The picture (right) shows the trestle installed across what will become Sulphur Gulch with the helix behind the trestle. The helix has been wrapped with cardboard strips to prevent any derailed trains from falling to the floor inside the mountain. In order to construct Sulphur Gulch it was first necessary to make sure the trestle fit perfectly and that the track across the trestle was completely dependable. After the trestle was checked for a good fit it was removed from the canyon so that the scenery could be constructed. 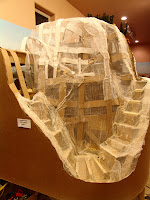 The next step was to form the mountain with cardboard strips held together with hot glue. Mother nature (aka Chairwoman of the Board and the artistic director for the ATSGRR) suggested that mountains should contain ridges, crevices, streams to feed the waterfall, and other scenic details. The actual forming of the mountain was modified a couple of times to comply with Mother Nature's tendency to provide interesting terrain and a stream to feed the waterfall falling into Sulphur Gulch. Once the basic shape was formed the cardboard lattice was covered with cheese cloth which was held in place by diluted white glue brushed on to hold the cloth in place (left). 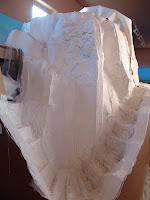 The next step was to brush a coat of plaster over the cheese cloth to form a thin plaster shell that provides the basic form of the mountain and canyon. The picture (right) was taken after a couple of plaster casts of rocks had been added to the top of the mountain. 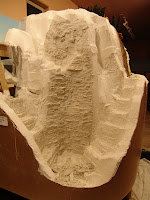 Now the fun began. A single casting of a piece of a rock that resembled limestone was placed as a ledge near the top of what would become the top of Lower Cadi Falls. Using this casting as a pattern the rest of the cliff behind Lower Cadi Falls was formed by placing a layer of plaster about 1/2 inch thick over the shell. As plaster of Paris sets up it becomes soft like clay for about 30 minutes. While it was in this stage the rock was carved using a pen knife and a small pallet knife. A small piece of wire brush was also used to flick pieces from the cliff and to provide 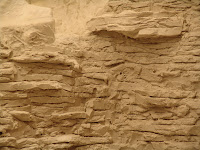 some irregularity in the stone. The challenge is to avoid repetition. Only one cup of plaster can be worked at a time so the process was repeated many times working from the top to the bottom of the cliff until the cliff was all carved. The close-up picture shows the detail of this carved limestone rock. This sculpture process required 8 or 9 hours to complete. 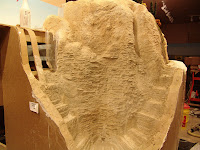 The process of coloring the terrain required several steps. First, the plaster was sprayed with a mixture of a few drops of India ink and a few drops of detergent mixed in a mixture of water and alcohol This emphasizes the cracks, crevices, and irregularities in the rock. The next step was to spray the surface of the rock with a very dilluted mixture of water-based paint in the lightest color of the rock. The base color for mountain above Sulphur Gulch was a light tan color, the base color for the cliff behind Lower Cadi Falls included a tiny bit of blue acrylic tube paint to give it a more gray hue. 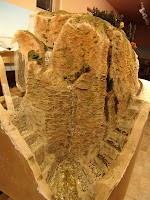 fter the base color was sprayed and dry the next step was to brush color into the rock. There are two sources for this color: powered pigments (burnt sienna, raw umber, chrome green) and powered pastel chalks in various earth tones. These were dry brushed onto the rock in a way that hopefully resembles nature. The lower falls emphasized the raw umber and grays while the upper falls and cliff above Lost Creek used warmer colors such as burnt sienna and yellow ochre. Once the color had been brushed into place it was sealed with a Matt finish spray. 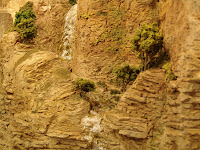 Water was formed using Woodland Scenic's EZ water, which melts at a relatively low temperature and forms a liquid that can be poured into the stream and down the waterfall. It has a tendency to blob up when it hits the cold plaster but this is easily corrected by using a heat gun to remelt the material causing it to liquefy and low into the rocks in a natural manner. After it hardens a bit of white paint is added for the rapids and foam occurring with fast moving water. Left shows upper Cadi Falls and the top of Lower Cadi Falls with a couple of trees added. Right shows Lower Cadi Falls before the trestle was in place.

Final details complete the scene. These include trees, shrubs, and ground cover all constructed from Woodland Scenics' ground foam in various colors. The ATSGRR is set in the year 1937 in the fall of the year. Consequently the undergrowth and a few trees have started to turn to their autumn spender. 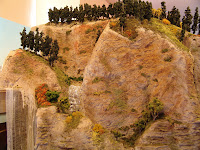 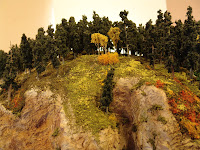 in place and the autumn colors beginning to show. Right shows the top of Whetstone Ridge. The ground shrubs have turned red and the aspens are yellow against the dark pines. To create a feeling of depth trees were planted to force perspective, that is, larger trees were planted in the foreground but toward the top of the ridge the trees are smaller and smaller to appear further away from the viewer. 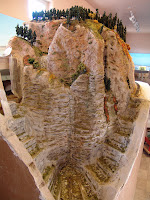 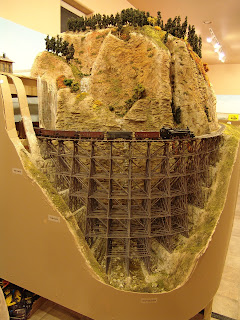 Right shows the completed project with the trestle in place and a coal drag crossing the trestle.

Perhaps you are wondering about the unfinished portion to the left. This will be a tunnel where the track enters the helix on its descent to Provo from Ascape. Because the track was not yet "bullet proof" the mountain across the tunnel was left unfinished to enable trouble shooting the track. In the near future a tunnel portal will be placed in this location.

There is one other note of interest for those who wonder about the sanity of the owners in constructing the large trestle at Sulphur Gulch. The engineer constructed this trestle from a single piece of 1 x 4 clear pine. He ripped the board into 1/4 inch slices on a large table saw. He then ripped these pieces into scale sized lumber for the trestle using a small table saw with a very sharp carbide blade which had been pushed through the plate so there was no clearance between the blade and the plate. The bents were first drawn to exact size on a piece of poster board. The upright timbers where then placed over the drawing using double stick tape. The cross supports were then glued to the uprights with carpenter's glue and weighted. After all the bents had been constructed the trestle was assembled upside down. The trestle is on a grade and a curve. A piece of board was cut to the exact radius of the curve and one end was raised to represent the exact amount of the 3% grade. The track support beams and ties were then placed on this board using double stick tape. The uprights were then glued to the support beams using a level to get them vertical. The diagonal beams for each pair of bents were glued in place using contact cement. Then the cross support timbers were glued in place. The construction of the trestle was spread over about 6 months working an hour or two at a time.

The trestle was stored for almost 5 years. Remarkably after a couple of moves it survived rather well. As seen in the photographs the walk and railing around the top of the trestle did not survive undamaged and needs to be repaired and the railing replaced (another project yet to come). The right end of the trestle did suffer some damage in storage so the last 4 bents, diagonals and cross braces was reconstructed before the trestle was returned to Sulphur Gulch. 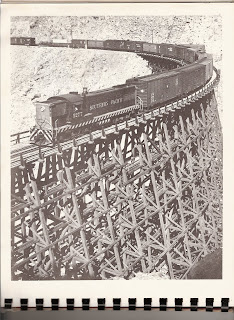 The trestle is modeled on an actual trestle which existed on the Southern Pacific Railroad. This was pictured inBridge & Trestle Handbook for Model Railroaders by Paul Mallery 1972, The Builders Compendium. This handbook also contains detailed information about the construction of trestles. The original trestle has since been covered with fill. The model on the ATSG was constructed a number of years ago for the first Ascape Tennsion and Sulphur Gulch Railroad. Whetstone Ridge and Sulphur Gulch was constructed to accommodate this original model.

Tourists are welcome to come and ride the local passenger train across the trestle at Sulphur Gulch. Call to schedule your excursion on the ATSG.