Friday November 13 and Saturday November 14 was the First Annual Southern Utah Model Railroad Tour sponsored by the Southern Utah Division, Rocky Mountain Region of the National Model Railroad Association sponsored by the Color Country Model Railroad Club. The goal was to have trains running on the Ascape Tennsion & Sulphur Gulch Railroad by this date. Thanks to members of the model railroad club who were involved in to a couple of work Saturdays and a late work night Thursday November 12 the goal was met and the first trains ran Friday Night. Particular thanks to Doug Whetstone who coordinated these work activities and spent many hours personally getting the ATSGRR ready to run. Without this effort by Doug and members of the club the trains would still be residing in their storage boxes where they have resided since 2004. 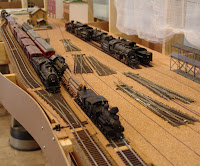 Friday morning, after 5 years in storage, boxes were opened and some of the rolling stock and the locomotives of the the ATSGRR arrived on the newly laid track. The management was most pleased with the result when the trains ran from Ascape to Echo Junction without any problems. There were still track problems in the helix so there was no traffic from staging.

Photo 1 shows a view of the Ascape yard with three trains ready to make the run from Ascape to Tennsion and then up the grade to Coalville and Echo Junction. In the upper left of the photo you can 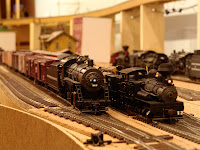 Photo 2 shows number 82, a 2-8-0 consolidation with a 10 car freight ready to tackle the grade. The locomotive was able to handle the grade but will obviously need a helper during operating sessions for trains longer than 8 cars. The photo also shows number 7, a three truck shay with a short string of log buggies ready to tackle the grade. You can see the track support for the high line at Echo Junction behind the locomotives.

Photo 3 shows number 9, a 2-6-6-2 Uinta sitting on the siding at Echo Junction with a string of loaded coal hoppers ready to descend the grade to Ascape for shipment on to Provo. It was able to negotiate the down hill grade with ease and was also able to the same loaded hoppers up the grade from Ascape to Echo Junction.

The visitors really seemed to enjoy the event. The little bit of scenery that was completed for the demonstration held earlier really helped them to visualize the finished railroad. A few structures were also placed in the approximate location on the layout. However most of the layout was more "roller coaster" in appearance with roadbed and track suspended in space. Running trains on this exposed roadbed caused some anxiety for the management but fortunately the only crash occurred when a train was pushed through a closed switch causing one box car to plunge to the depths.

The next big event is a New Year open house January 2, 2010. Hopefully natural events will cause mountains to rise, rivers to flow, trees to sprout, and structures to be erected before this event. One thing is for certain, the investors will be happy to know that trains began to run by the end of 2009 as specified in the contract with the land owner. Trains will for sure be running for the new year in 2010. The management hopes to see you at the open house. It is anticipated that regular operating sessions will commence early in 2010.
Posted by Ascape Tennsion & Sulphur Gulch Railroad at 3:22 PM