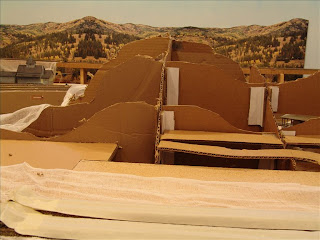 After getting the track installed and operational the president was anxious to have scenery to cover the bench work. An earlier post in this series showed using cardboard strips covered with cheese cloth to form the mountain at Whetstone Ridge. The ATSG Railroad moves from the high mountains to a more pastoral landscape with rolling hills.

Rather than cardboard strips "mother nature" decided to experiment with cardboard profile boards to form the framework for the scenery. The first photograph shows the profile boards for the rolling hills behind Tucker Junction, the eventual site of the Saw Mill and other industries. 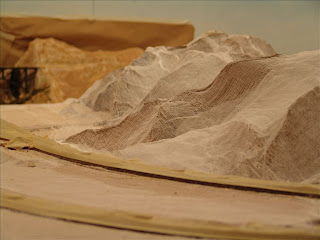 The next picture shows the profile boards covered with cheese cloth ready for a coat of plaster to form the hills. Tucker Junction is located just in front of these hills.

In March the Color Country Model Railroad club was hosted by the ATSG Railroad management. The purpose of the meeting was to provide an opportunity for club members to get hands on experience in creating plaster scenery over cheese cloth.

Plaster of Paris was used mixed one cup of water to two cups of water, a rather soupy consistency when first mixed. To avoid a very white scenery base the plaster was colored with a teaspoon of powered stucco dye, available at the hardware store for only a few dollars. Mixing the plaster in the bottom half of waxed milk cartons seems to be the best container for spreading the plaster. The soupy mixture is brushed onto the cheese cloth structure using cheap paint brushes. The scenery party had about 8 participants everyone taking a section of the railroad and painting on the plaster mix. It was messy but the base scenery for a considerable section of the railroad was completed during this work session. A good time was had by all. 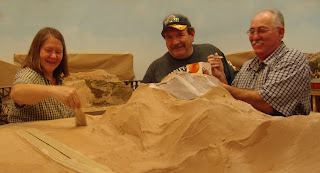 The final picture is shows club members Judy Chaston, Larry Chaston and David Padilla brushing on the plaster soup to form the hills behind Tucker Junction.